Davinia and Leela spent years researching, digging through forgotten archives, searching for clues. Their mission was to locate priceless treasures. Their current site called White City lay at the tip of a once-massive inland basin. A Lake evaporated by the Great Cataclysm.

Discoveries in White City suggested that their ancestors once lived alone, in large spaces within larger cities. The theory sparked heated debates among their colleagues.

“Leela, you’ve got to see this,” Davinia said as she unearthed a plastic box and pried open the lid. Inside, were layers of well-preserved ancient photos. 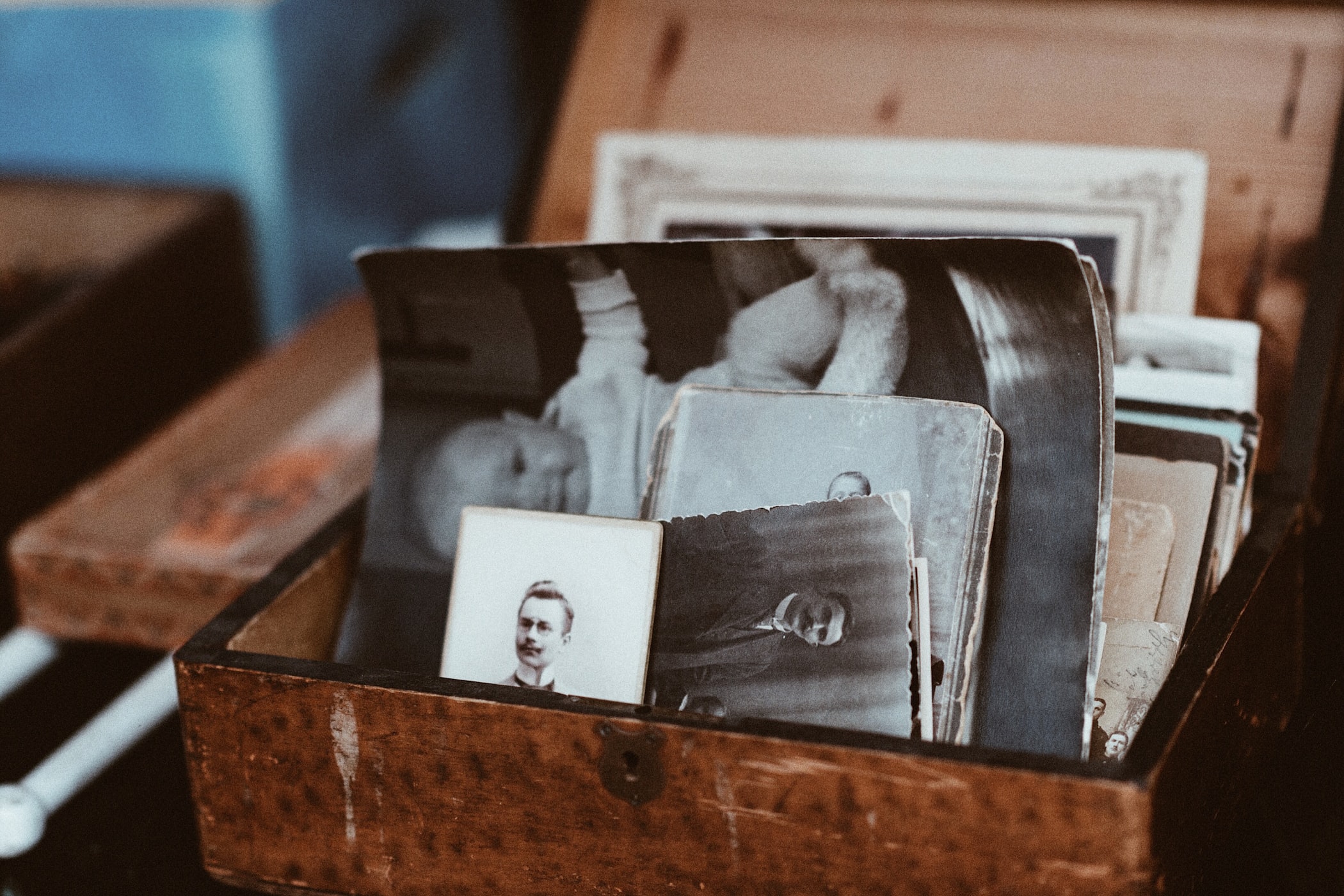 Photo by Roman Kraft on Unsplash

The best pieces were auctioned first. The hammer fell, the winning bidders paid, and scurried home clutching their new, old treasures. I stayed to the bitter end, bidding on lots no one else wanted. My prizes cost me a dollar, and the auctioneer tossed in other unsold items.

At home, I uncovered an antique trove. Pictures of a long-forgotten gentleman. My finger outlined his sepia-toned face, and I wondered about his life. Was he a good man? A brute? A devoted son? A cruel father? Whatever happened, the photos chronicled his lost legacy, unremembered, in my bargain auction finds.

It wasn’t glamorous, but desperate humans took any job to help pay for survival. Trey learned early when the day boss paid cash, he wasn’t paying you to ask questions. Today’s assignment promised a hefty bonus upon successful completion of eight hours spent sitting in a black panel van. His instructions were to call to report any changes.

Trey watched a deserted alleyway, struggling to stay awake. A low-frequency hum made him twist in his seat as he tried to locate the source. It grew louder and shook the truck. Too late, he realized the alien abduction stories were true.

photo by Robert Collins via Unsplash

Oppressed by smoke-filled lounges, pressured by incessant demands, and depressed by his dismal gray life, he sings of halcyon days when opportunities lay before him.

He clutches a faded photo, reliving wrong turns, what could have been, and love lost along the way.

After a lifetime spent running away, he croons, promising with the new dawn, a reborn man will stand tall to honor his legacy.

Photo by Luigi Boccardo on Unsplash

Teresa lived in happiness, cultivated friends and fun until her father issued his ultimatum.

Straighten up, fly right, life is a serious business, he said. Walk the narrow path, focus on your goals, success lies in reaching your destination.

She complied, eliminating distractions until she sat alone, heartbroken in her hollow golden paradise and wept for the life, she might have known.

Photo by Greta Farnedi on Unsplash

Jorden felt a sweet breeze touch his body. It was a sharp contrast to the stale, putrid stench inside their cell. He pushed against the big oil drum until it keeled over on its oxidized rim and he rolled it away. It took him several minutes to clear the towering barrels stacked three high next to what he had assumed was a wall. With them gone, a weathered, rusty metal-clad doorway greeted him. Between the gaping fissures around the door handle, glimpses of freedom leaked into the darkness.

He gritted his teeth and strode toward the glad rag girl cowering in the corner.

“I thought you said there was no way out?” Jorden paused his fists clenching and unclenching as he waited.

Sidera slumped, hanging her head she concentrated on the toe of her shoe as she traced patterns in the dirt.

“They leave and never return.”

“What? No waiting list for this paradise?” Jorden smirked, then grimaced as slime oozed down the walls trickling into the cracked foundation where everything disappeared.

“Wait. There have been others? Where are the keys?”

Sidera hands flew to her neck, and she dropped, crouching close to the ground. Jorden looped a finger under the chain and pulled them free.

“You ready to go?” he asked extending his hand to her.

With tears streaming down her face she looked up at him.

“The gatekeeper cannot escape unless someone comes for her.”

“They never keep their promises.”

They labeled the reports fake news, a myth concocted to defraud the susceptible. Rumors persisted and experts swore to the claim’s veracity. Video evidence showed the transformation of an ancient chrysalis discovered in the museum’s basement.

The curious stood in the line determined to see the beast before their eyes and discern the truth.

His pure white coat glimmered, crowned by a sparkling mane and golden hooves. The horse’s most notable features were his massive wings.

Pegasus, they said had returned from the heavens to save the world.

Saying I was skeptical and creeped out, was an understatement. Jose promised me, I wouldn’t regret it.  So, against my better judgment, I agreed.  At least San Antonio offered a brief relief from Houston’s high humidity and gray skies courtesy of the remnants of Tropical Storm Imelda. I had planned for the three-hour trek west on Interstate ten, packing water, snacks, and a good book to combat the flat, brown, monotonous scenery.

Jose had other ideas. I heard him coming blocks before he arrived. The chest vibrating throb of the subwoofer announced his arrival. His low-riding, metallic lime green 65 Chevrolet side-step pickup truck bounced and shimmied to a stop in front of my house. Jose’s face beamed as he manipulated the hydraulics making the vehicle dance to the beat of the music. As the song ended, the chassis sank, the wheels disappeared into the fenders that rested millimeters off the ground.

“¿Estás listo para jugar?” he asked as he leaned across the seat and pushed open the passenger door. He motioned to the cooler and my bags and tossed head backward stating, “Throw that stuff in the back.”

I did as he instructed before I slid in next to him.

“¿Te gusta?” he spread his arms wide, pointing to the lime green and cream interior before he winked at me.

“I can’t say I was expecting this,” I giggled, a little overwhelmed by the color. It didn’t help that Jose was wearing a linen tangerine orange shirt, that did nothing to subdue the visual overload.

“She is something,” I admitted.

I settled in and we were off. Between the bucking Chevy, the heart-pounding Tex-Mex hip hop, and Jose’s excited pointing and explanations of passing roadside attractions, the trip was anything but dull. Before I realized it, we were pulling up to Camden Street Bridge.

We found a parking spot under the overpass where hundreds of other people gathered. Children played along the riverfront while parents prepared tailgate dinners.

Jose pulled a blanket emblazoned with a Mexican flag from the truckbed and threw it over the hood and anchored it with the bright red cooler. The sun was just setting as we ate and chatted with those around us. Periodically, talking stopped and eyes scanned the sky. Everyone was waiting. Hopeful anticipation filled the air.

Then, as the first evening star twinkled in the heavens, a murmur rose from the throng, followed by the reverberation of one hundred thousand wings beating the cool night breeze.

“Look,” Jose breathed, “There they are. The Mexican free-tail bat.” They flew. A black undulating cloud of swooping and diving bats emerging from their roost in the crevices cut under the bridge. It was time for their nightly feeding of the city’s unsuspecting bugs and insects.

Oo’s and ahh’s emanated from the crowd at the spectacle silhouetted against the crimson and coral pink sunset.

I could only nod in agreement.

Photo by Ravi Roshan on Unsplash

Annora teetered, swaying back and forth, she walked a thin line. She heeded the lessons, listened to the morality tales, and promised to be a good girl.  Yet, she questioned their version of the golden rule.

What once was black or white, now wore shades of gray that obscured tender truths and polished vicious lies. Distorted glass magnified the glaring light, while trapped in shadows, Annora couldn’t tell if she was the spider or the fly.

Praise or disdain, honored or disgraced, right from wrong, good versus bad, her fate lay in her choice. Annora let her heart decide.

Filled with only the essentials, I tucked the bag under a pile of laundry in the closet’s corner. I closed the door and waited. Silence filled the apartment, and I dared to breathe. Months of planning, scheming, subterfuge, and second-guessing had brought me here. Perched on the brink, I wondered if I possessed the courage to jump.

“What are you doing?”

He reeked of vodka. His question froze my blood making my heart pound as it tried to keep me alive.

“I cleaned. I know you don’t like when things are messy.”

The voice was mine, it echoed in my ears He studied the room before his piercing eyes returned to study me. My hands betrayed me. They trembled and I jammed them on my hips, elbows thrust wide, hoping I exuded confidence.

He turned, and I nearly laughed. Then, he stopped time. Unable to move, the scene unfolded, and he dangled my escape in front of me. So close, I could almost touch it.

I gulped precious air. I planned for this, rehearsed my lines.

He ripped the zipper open and shook the contents free, never showing a single emotion.

“Is this some sick trick? Why is my stuff, in your bag?” I let my anger and rage creep into my questions.

I didn’t see it coming, but I lay on the floor, his shoes walking away.

I fished my phone from my pocket and called 911. It was now, my only way out.