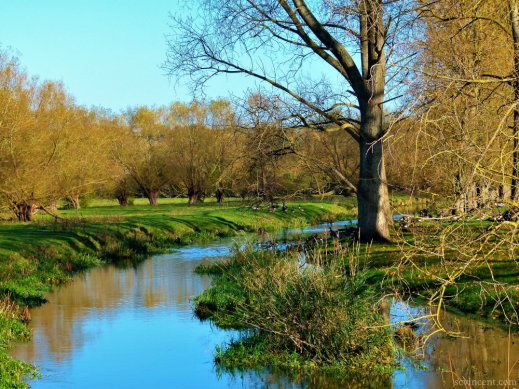 Tex curled the left side of his lip and made a clicking noise. He squeezed his right knee into Red’s side directing him to turn left.  The snow had melted, and the melt seeped into the ground causing the crick to overrun its banks. Everywhere Red stepped was a mire of mud and muck. In places, Red sank deep into the mud, water rose to his knees and threatened to submerge Tex’s stirrups. Red stepped high, moving deliberately without panic. Tex had felt hesitation in Red’s steps as they slogged forward and knew they’d best turn back. They gained nothing by going further.

The grass was growing, his cattle were hungry, and the feed was running low. Still, he couldn’t turn cattle into this field. Cows might be fine, but many had calved, and a calf wouldn’t survive in this water-sodden land. If they survived the birthing, the calves would succumb to the persistent wet and cold. Cows weren’t God’s brightest creatures so Tex would spend his time keeping them safe.

Red’s hooves sucked and plopped as he moved through the field to higher ground. Tex rubbed his hand across his face, adjusted his hat, then patted Red’s neck.

“What are we gonna do ole boy?” Tex asked. Red tossed his head and snorted. It made Tex laugh.

Tex considered his options. There weren’t many. The hay would last another day, two at most. He could supplement corn, but the cows would eat it quickly, and leave him without seed to plant. If he gave the cattle corn, it would mean purchasing more corn to plant his fields. He had less money than hay.

The cattle had grazed their current pasture into submission and the land needed time to regenerate. The last option was purchasing hay and hoping the snow melt dried up soon. Money, again. Tex figured numbers, thought about his money shortage and worried, as Red took them home.

The sun hung low when they approached the barn and Tex figured he had run short of ideas. A meal, a good night’s sleep, and the morning might look less bleak.

Tex woke before dawn to begin his morning chores. As he worked, a plan took shape. He saddled Red. They needed to check the herd, count calves and then head into town. It wasn’t a plan he liked, hell he hated the idea, but it might see him through spring.

Hat in hand, he approached old man McGregor and asked him if he wanted to purchase a hundred head of cattle.