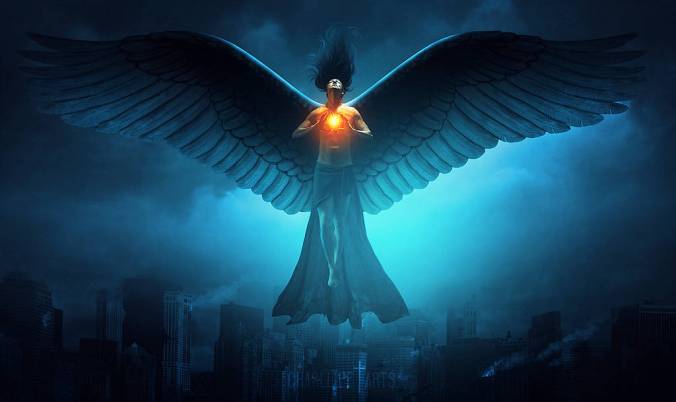 Crouched behind the building’s jutting column, I accessed the alien landscape. Cold, stark and silent they had transported me into a hidden world. We were trapped between reality and dreams.

In the street, stood a glorious black angel his wing unfurled, confronting a monster straight from my nightmares.

“Why don’t you run?” the monster growled.

“I should fear you?” the angel sneered.

“You know my reputation.  I hold life in my hands.”

“My words echo in her mind long after I have gone,” the monster said licking his lips.

“Your words fall apart once removed from the dark,” a fireball erupted from the angel as he spoke and hurled toward the monster.

The monster saw his opening, rearing back he lunged at the angel. They rolled in the street and I watched in horrified fascination.

“Submit, dishonored beast, you won’t gain your redemption with her salvation,” the monster howled.

“I won’t let you win,” the angel roared as another fireball propelled the monster back.

I couldn’t stand the self-mutilation of my fallen cherub and my noble monster. I stepped from my hiding place and screamed.

“Enough. Neither of you will win, and we all will die. The decision is mine. We must learn to live together,” I said. “We are two sides of the same coin, and neither side is fully right nor fully wrong.”