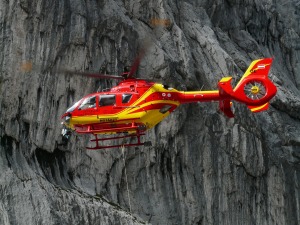 Gregor brought the Notarzt-Einsatzfahrzeug to a screeching stop a few yards from the helicopter. He grabbed his bag and ran for the door. The helicopter lifted off before the crewman slammed the door behind him. Seconds counted. Gregor tucked the bag between his legs and jammed on the headphones.

“Zugspitze,” a voice crackled in his ears.

Gregor paled and his hands shook.

He started this journey long ago when he was just a boy. Determined, persistent, always choosing the most difficult path, it was the only way he knew. Still, he had been the top student in his class. Anything less would have been failure. His time at Universität Heidelberg the “Harvard of German Medical Schools” had been no exception.

With his newly minted Notfallmedizin board certification, this first call determined everything.

The helicopter buzzed to the cliff site. On the ledge below two hikers looked to him to save their lives.

As the basket lowered him to the narrow ledge, he closed his eyes repeating the words that had brought him back to this place today.

“I promise, Dad. I won’t let anyone else die like this.”