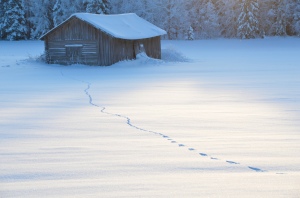 The calendar said it was spring. Winter didn’t agree. Spring break found Paloma at her parent’s farm helping with the lambing. It was a busy time at the farm and they appreciated the extra help.

She stayed later than common sense allowed, but she couldn’t leave the last lambing ewe. Five years ago, Dad let her pick a lamb to raise for her 4H project. After assessing each new lamb on the farm, she had chosen one and named her Juju. Juju won blue ribbons for Paloma and she considered it her duty to make sure she lived. Two big boys fought to win the title of firstborn followed by their smaller, meeker sister.

Dad looked at the sky and reminded Paloma the forecast predicted snow. She glanced back at the pen to see the boys now fighting for a place at their mother’s utter and laughed. Mom had packed her car for the trip. She told Paloma of the care package stashed in a box on the back seat as she hugged her goodbye.

The storm hit Paloma an hour into the drive back to school along a lonely patch of road that snaked through hills and forest. The voice on the radio informed her the storm was developing into a blizzard. She leaned forward over the steering wheel searching for signs of the road she knew lay under her wheels, at least for the moment. White flakes danced in the headlights, obscuring what lay ahead. Patches of the road flickered in and out of sight as the wind buffeted the front end of the car threatening to run her off a road she no longer trusted. The guardrail guided her around a curve and warned her of the steep drop off on the other side.

“This is crazy. I’m going to end up dead,” Paloma thought as another blast shook the car and she felt tires spinning on ice. She took her foot off the gas pedal allowing the tires to regain their grip on the road. The guardrail ran out as the car slowed. Paloma recalled a section not far ahead where the land was level and the shoulder widened. She braked, pulled the car off the road and slid the gear selector to park. She collapsed across the steering wheel, her hands shaking.

The storm roared around her, but for now she was safe and warm. Thanks to Mom, there was plenty of food and a warm blanket in the back seat. She checked her cell phone. As expected, there was no signal here. The radio worked, and she settled in to wait out the storm. She searched for headlights, a sign of life. There was nothing.

She woke with a start. No sound, even the radio was silent. A weak light kissed the tops of sugar-coated trees turning the landscape into a confectioner’s paradise. She shivered in the cold. Paloma tried to start the car, the battery cranked, but didn’t have the amps to start the motor. She sighed and considered her options. Still no cell service. There was a town several miles up the road, but it would be a long walk. Paloma grabbed a bag from the back and filled it with supplies for her early morning walk.

An hour into her trek her entire body shivered, too cold. The wind pummeled her every step, threatening to take her breath away. So far, she was the only living thing along the road. In the distance, she saw an old, weathered building. It had seen better days. She stopped realizing other tracks already lead to the building. She needed shelter and a fire before she went any further. Not knowing if the tracks were animal or human, she moved forward. Committing herself to whatever lay ahead.